Australia is the world's sixth-largest country by total area and has a population of approximately 25 million people, with most people staying in the 6 major Cities of Melbourne, Sydney, Adelaide, Perth, Brisbane and Darwin.

The country is split into states and territories being: Victoria, New South Wales, Queensland, Northern Territory, Western Australia, South Australia and Tasmania. Australia has many attractions for international students including the high quality education system, climate, great lifestyle, sports, beaches, strong industries, and too many is seen as the land of opportunity.

Australia’s popularity as an education destination for international students is forecasted to continue in the long term, fuelled by the economy’s continued steady growth, high standards of living and lifestyle opportunities among numerous other factors.

Australia is a land of contrasts: sweeping golden beaches, coral reefs rich with marine life, tropical rainforests, mountain ranges, vast grazing lands and sparse deserts. One of the oldest continents, Australia is the only country to occupy an entire continent. Surrounded by the Indian and Pacific Oceans, Australia has many animals and plants, which are unique on the planet. The surface geology is typically old and flat with a major mountain range stretching down the eastern coast and another mountain range in the northwest of the continent.


Victoria has stunning mountains, valleys, rivers and coastline to explore if you want to get out of Melbourne for a bit. Take time out in the Yarra valley to wander through the wineries and historic country towns, visit the Grampians for some alpine vistas or check out the world famous Great Ocean Road and 12 Apostles.

Victoria is the most densely populated of Australia’s 8 States and Territories. Some 26 per cent of all Australians live in Victoria and, of those, most reside in Melbourne, the nation’s second largest city and state capital. 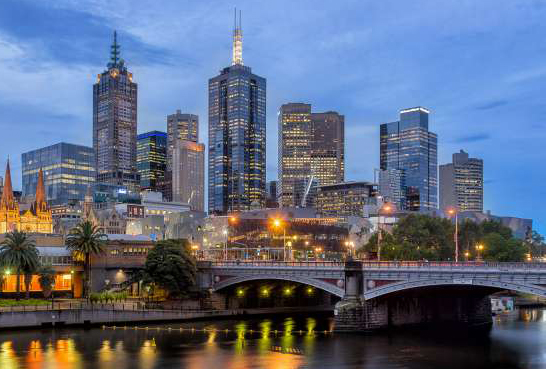 Melbourne has been consistently ranked as “one of the world’s most liveable cities “by the economist intelligence unit (UK). It’s a great place to study and live. With a population of approximately 4.8 million, Melbourne is the second largest city in Australia.

Melbourne is the capital of the state of Victoria. It is situated on the Yarra River and around Port Phillip Bay with its beautiful beaches and water sports facilities. It is a beautiful spacious city with parks, gardens, sporting venues and hundreds of scenic places. In 2000 Melbourne was accredited as a “Safe Community” by the world health organization – the first Australian capital city to achieve this standing.

Thirty percent of Melbourne‘s total population was born overseas and Melbourne has the largest population of international students in the country. Melbourne’s residents represent 140 nationalities, and 170 cultures that speak 151 languages. This broad ethnic mix has brought many benefits to the city including a wide range of cuisines and thousands of restaurants, bistros and cafes.

The city centre is on the banks of the Yarra River, 5km from Port Phillip Bay. Melbourne is only a short distance from many beautiful beaches as well as the Victorian mountain regions, where skiing is popular during winter. Melbourne has an excellent public transport system with trams, trains and buses providing an extensive network throughout the city and suburbs.

Melbourne is a world-renowned cultural, artistic, financial and communications centre served by an international airport, a cargo and passenger seaport, and rail links to neighbouring States. The city is considered to be the shopping capital of Australia and offers some of Australia's biggest shopping complexes as well as sophisticated, exclusive boutiques and a host of lively and popular markets.

Safe and Friendly
Melbourne is one of the safest cities in the world to live, work and study. The locals are friendly, and the city’s multicultural vibe means you’ll instantly feel at home here. Whether you’re heading out for a bite to eat, exploring the parks and leafy boulevards or just catching the tram to Gippsland Institute of Technology, you’ll feel secure and welcome.


Shopper’s Paradise
With locally designed originals and the best of international brands to choose from, Melbourne shoppers are spoilt for choice.


Food
The melting pot of cultures in Melbourne is reflected in its restaurants, cafes, bistros and bars. You can feast on a dizzying spread of the world’s great cuisines or just follow your nose down a cobblestoned. Sometimes called the culinary capital of Australia, Melbourne has a vast array of restaurants, offering a variety of international cuisine. Bustling Chinatown in the heart of the city, serves up the finest of Asian cuisine and culture. Several other Melbourne streets are dedicated to Vietnamese, Japanese, Italian and Greek food - cuisine to suit every palate and many to suit a student's budget.


Culture
Melbourne kicks up its heels all year round, offering everything from opera and Broadway spectaculars to contemporary dance and comedy. The art scene evolves with constant displays at museums, galleries, public art spaces and artist-run venues throughout the city.


Religion
Australia is predominantly a Christian country however; all religions are represented in our multicultural society. Australians respect the freedom of people to practice their choice of religion. Churches, mosques, temples and synagogues are located in most major cities. Some universities have their own spiritual groups on campus.


Weather
As a general rule, Melbourne enjoys a temperate climate with warm to hot summers, mild and sometimes balmy springs and autumns, and cool winters.While Melbournehas a reputation for rain, the city actually receives less rainfall than either Brisbane or Sydney. Melbourne is an excellent place to see the seasons change. In summer, most people head out to visit our golden beaches. In autumn, experience the glorious foliage of the many European-style parks that fringe the CBD. In winter, enjoy the warmth of cosy cafes and bars. Spring is a time for renewal – a great time to head back into our parks and revel in our beautiful gardens. Melbourne’s climate is mild temperate, with four distinct seasons. Average temperatures in summer are 14-24C, in spring and autumn are 10-20C, and cool winters average 7-14C. You can check the latest weather conditions, forecasts and weather warnings at http://www.bom.gov.au/